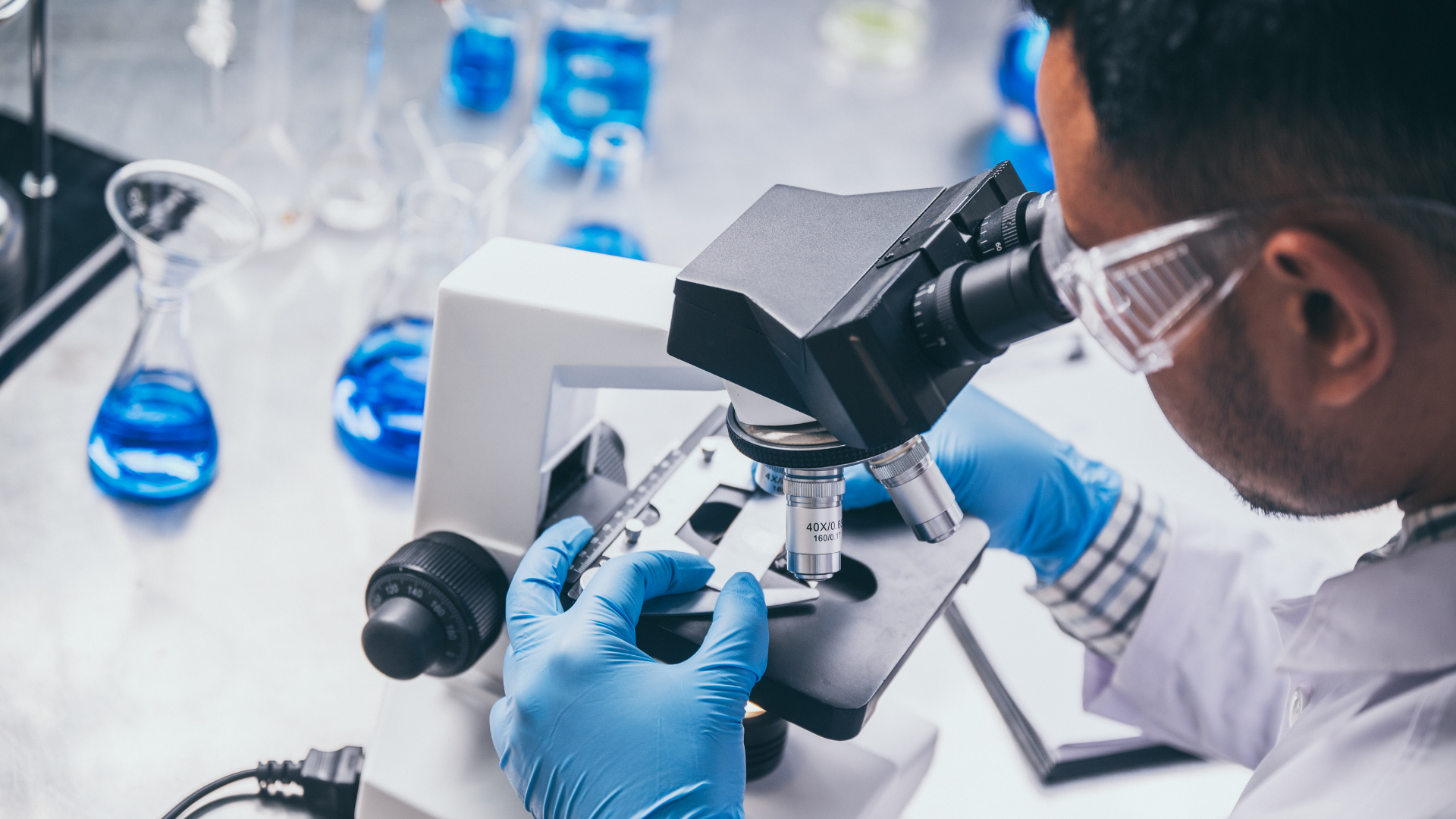 A connection between the human herpesvirus Epstein-Barr and multiple sclerosis (MS) has long been suspected but has been difficult to prove. Epstein-Barr virus (EBV) is the primary cause of mononucleosis and is so common that 95 percent of adults carry it. Unlike Epstein-Barr, MS, a devastating demyelinating disease of the central nervous system, is relatively rare. It affects 2.8 million people worldwide. But people who contract infectious mononucleosis are at slightly increased risk of developing MS. In the disease, inflammation damages the myelin sheath that insulates nerve cells, ultimately disrupting signals to and from the brain and causing a variety of symptoms, from numbness and pain to paralysis.

To prove that infection with Epstein-Barr causes MS, however, a research study would have to show that people would not develop the disease if they were not first infected with the virus. A randomized trial to test such a hypothesis by purposely infecting thousands of people would of course be unethical.

Instead, researchers at Harvard T. H. Chan School of Public Health and Harvard Medical School turned to what they call “an experiment of nature.” They used two decades of blood samples from more than 10 million young adults on active duty in the U.S. military (the samples were taken for routine HIV testing). About 5 percent of those individuals (several hundred thousand people) were negative for Epstein-Barr when they started military service, and 955 eventually developed MS. The researchers were able to compare the outcomes of those who were subsequently infected and those who were not. The results, published on September 13 in Science, show that the risk of multiple sclerosis increased 32-fold after infection with Epstein-Barr but not after infection with other viruses. “These findings cannot be explained by any known risk factor for MS and suggest EBV as the leading cause of MS,” the researchers wrote.

In an accompanying commentary, immunologists William H. Robinson and Lawrence Steinman, both at Stanford University, wrote, “These findings provide compelling data that implicate EBV as the trigger for the development of MS.” Epidemiologist Alberto Ascherio, the senior author of the new study, says, “The bottom line is almost: if you’re not infected with EBV, you don’t get MS. It’s rare to get such black-and-white results.”

Virologist Jeffrey I. Cohen, who heads the Laboratory of Infectious Diseases at the National Institute of Allergy and Infectious Diseases (NIAID) at the National Institutes of Health and was not involved in the research, is cautious about claiming “cause.” He argues that it still must be shown that preventing Epstein-Barr prevents MS but agrees the results are dramatic. “When the original studies were done with cigarette smoking and lung cancer, they found a 25-fold risk factor for people who smoked more than 25 cigarettes a day,” Cohen says. “This is even higher.”

Much of the world’s population, especially in developing countries, is infected with Epstein-Barr very early in life without much ill effect, although the virus can lead to several rare cancers. Everyone else is infected in adolescence and young adulthood, when Epstein-Barr usually leads to infectious mononucleosis, also called “kissing disease” because it is transmitted via saliva. After infection, Epstein-Barr lives on in some B cells of the immune system, and the antibodies developed to fight it remain in the blood.

In the new study, which is a much larger expansion of a 2010 investigation, the researchers analyzed up to three blood samples for each individual with MS: the first taken when most of the military personnel were under the age of 20, the last taken years later, before the onset of the disease, and one in between. The team was looking for seroconversion or the appearance of antibodies in the blood as evidence of infection. Each person with MS was also matched with two randomly selected controls without MS, who were of the same age, sex, race or ethnicity, and branch of the military. Out of the 955 cases of MS, they were able to assemble appropriate samples for 801 individuals with the disease and 1,566 controls. Thirty-five of the people who developed MS and 107 controls tested negative for EBV initially. Only one of the 801 people with MS had not been infected with Epstein-Barr before the disease’s onset. The risk of developing MS was 32 times greater for those who seroconverted by the third sample, compared with those who did not. As for the one case of MS in someone who remained negative for Epstein-Barr, it is possible that person was infected after the sample was taken, but it is also true that, in diseases that are clinically defined by their symptoms, such as MS,  it is highly unlikely that 100 percent of cases derive from the same cause, even if most do, Ascherio says.

“The numbers are just so striking,” says Stephen Hauser, director of the University of California, San Francisco, Weill Institute for Neurosciences, who was not involved with the study. “It’s really a uniform seroconversion before the onset of MS that is really far more significant than in the control population.”

But to be sure Epstein-Barr was the culprit, Ascherio and his colleagues also measured antibodies against cytomegalovirus, another herpesvirus, and found no difference in levels in those who developed MS and those who did not. Using a subset of 30 MS cases and 30 controls, they conducted a scan to detect antibody responses to most of the viruses that infect humans. Again, there was no difference. And to rule out the possibility that infection with Epstein-Barr preceded MS and not the other way around, the team also measured levels of a protein that is elevated in serum when neurons are injured or die and that therefore serves as a marker of the beginning of the pathological process before clinical symptoms appear. The protein levels only rose after the Epstein-Barr infection.

One major question remains, however: How does the virus lead to the disease? That is unknown and “elusive,” Robinson and Steinman wrote in their commentary. They proposed several possibilities, such as inducing an autoimmune reaction.

Even if Epstein-Barr is the triggering event for MS, the infection alone is insufficient for an actual diagnosis. Epstein-Barr, it appears, has to combine with a genetic predisposition and possibly environmental factors, such as smoking and vitamin D deficiency, to increase risk. Understanding the underlying mechanism will be important, the experts say. But meanwhile “this is the best epidemiologic lead we have in terms of the cause of MS,” Hauser says.

Historically, we have thought of MS as an autoimmune disease of unknown etiology. “Now we should start thinking of MS as a complication of infection with the Epstein-Barr virus,” Ascherio says. “This should open a new chapter in trying to find a way to treat and prevent the disease.”

Antivirals that target EBV in infected B cells are one possibility. One of the more exciting developments in MS in recent years was the success of B-cell-depletion therapies. In earlier work, Hauser and his colleagues found that the tissue damage in MS is primarily directed by B cells, which attack the myelin sheath protecting nerves. The therapies now approved for use are monoclonal antibodies that kill those B cells, thereby easing inflammation. They are not a cure but are highly effective against MS relapses, reducing the development of new lesions measured by magnetic resonance imaging (MRI) of the brain by an astounding 99 percent. They are also the only therapies shown to be effective against primary progressive MS, a previously untreatable form of the disease. “One might be able to refine these therapies that are working well and maybe just target the EBV-infected B cells,” says immunologist Christian Münz of the University of Zurich, who was also not involved in the new Science study.

Others are already working on vaccines that could prevent infection with Epstein-Barr. Moderna, which created an mRNA vaccine against COVID-19, launched a phase 1 trial of an mRNA vaccine for Epstein-Barr earlier this month. And NIAID’s Cohen expects to begin a phase 1 trial of another Epstein-Barr vaccine by the end of February. If these researchers succeed, such vaccines might dramatically reduce the incidence of mononucleosis and some cancers. And now it is conceivable that they could do the same for MS.